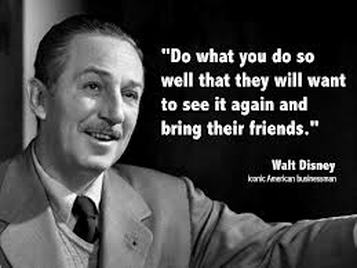 After Researching and viewing these Disney movies over again it became evident that religion plays a huge role in Disney movies. The amount of religious references that are found in almost every Disney movie is unbelievable. A lot of the time the religious references in the movies go unseen until a second look is taken. Just as many religions lay out definitions for ideal gender roles, family identities, marriage and other beliefs, Disney helps create gender identities for children, and a vision of what life should look like. Little girls dream of marrying their own Prince Charming, wearing the fancy ball gown, and having their very own fairy God Mother. Disney ultimately promotes a belief in the magic of Disney and faith hope and believing.

"Whatever success I have had in bringing clean, informative entertainment to people of all ages, I attribute in great part to my Congregational upbringing and my lifelong habit of prayer. To me, today, at age sixty-one, all prayer, by the humble or highly placed, has one thing in common: supplication for strength and inspiration to carry on the best human impulses which should bind us together for a better world." -Walt Disney